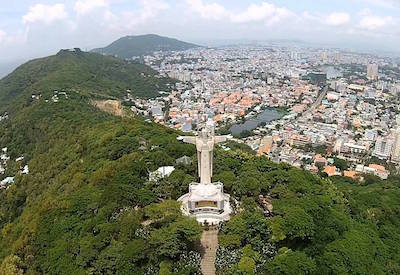 Ba Ria-Vung Tau Province is located in the Southern Vietnam, to the northeast of the Mekong Delta. It shares its border with Dong Nai Province to the north and Binh Thuan Province to the east, Ho Chi Minh City to the west and East Sea to the south – east.
Ba Ria – Vung Tau Province is a large tourist centre. It has over 100km seashore with beautiful swimming beaches, as well as many lakes and thermal springs. The offshore bench has two kinds of importance resources: petrol and seafood.

Located in the 90km southern part of Vung Tau, Con Dao Island has a dense forest, which is Con Dao National Park with rich flora and fauna. The sea in this area is home to various valuable marine species. Especially, tourists have a chance of watching the turtle laying the eggs. It also used to host a convict prison during French colonial era, and later, during the American War.