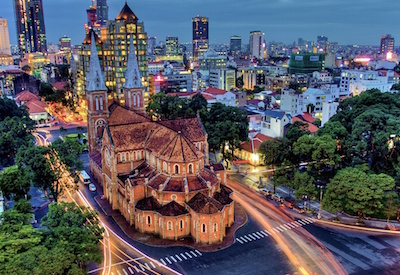 Ho Chi Minh City (Saigon) is Vietnam’s commercial headquarter, brash and busy , with a keen sense of its own importance as Vietnam emerges from years of austerity to claim a place in the “Asian Tiger” economic slugfest. Located on the Saigon River, Ho Chi Minh City is Vietnam’s major port and largest city, with an estimated population of over eight million people, most of whom cruise the town’s clogged arteries on an estimated three million motorbikes.

True to its reputation, the city is noisy, crowded, but the central business district is rapidly developing in steel-and-glass precision to rival any city on the globe. The old Saigon still survives in wide downtown avenues flanked by pristine colonials. Hectic and eclectic, Ho Chi Minh City has an attitude all its own.

Some of Saigon’s tourism highlights include the Vietnam History Museum ; the War Remnants Museum ; and Cholon, the Chinese District, with its pagodas and exotic stores. Dong Khoi Street — formerly fashionable Rue Catinat during the French era and Tu Do, or Freedom Street, during the Vietnam War, is once again a strip of grand hotels, some dating from the colonial era, new chic shops and boutiques, and lots of fine dining and cafes.

Saigon’s food is some of the best Vietnam has to offer, its nightlife sparkles, and the shopping here is fast and furious. The city is also a logical jumping-off point for excursions to southern destinations including the Mekong Delta, the Cu Chi Tunnels, and Phan Thiet, Nha Trang, Vung Tau beaches and Phu Quoc island.