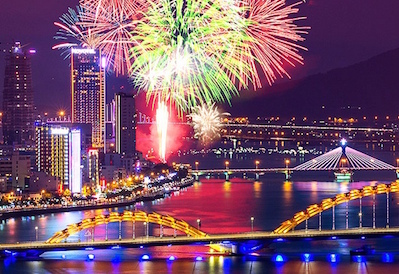 Da Nang is one of the cultural and educational centres of Vietnam, and it is also one of the biggest cities in Vietnam.

The city is located along Han River so that the French often called Da Nang as « Tourane ». Da Nang has an area of 1.200 km2 and its total population is about 800.000 people. It is not only convenient location but also easily accessible port. Situated on the path of national route 1A and the North-South railway, it is known as a hub for transportation. Da Nang city shares the border with Thua Thien Hue in the North, Quang Nam province in the South and The Eastern Sea. It is far 764 kilometers from Hanoi to the North, 964 kilometers from Ho Chi Minh City to the South and 108 kilometers from Hue ancient capital to the North-South.

Da Nang terrain has either coastal or mountains. The high and slope mountain is in the South and North-South, from here, many mountains lasts to the sea. The mountainous terrain accounts for large area with the high of 700-1.500 meters.

Da Nang is situated in the typical tropical monsoon area with the high temperature. Its temperature has combination between the Northern climate and Southern climate. Every year, there has 2 seasons: the rainy season lasts from August to December and the dry season lasts from January to July. The average temperature is about 25,90C and the highest temperature is in June, July, and August at 28-300C. The area of Ba Na has the temperature about 200C. The average rainfall is 2.504,57 mm and the highest rainfall is in October and November

The nature blesses for Da Nang to locate near three world culture heritages: Hue ancient capital, Hoi An old quarter and My Son Holly Land. It not only is the center of three world heritages but also has many famous destinations that tourists cannot forget when visiting the city. Da Nang has Hai Van pass which is well known as « the grandest pass ». Besides, it has Son Tra peninsula that is an ideal place for tourists. On the foot of Son Tra, there has Da spring, Bai But, Bai Rang, Bai Bac, Bai Nom… In addition, Ba Ba – Suoi Mo eco-tourism is considered as Da Lat, Sapa of the Central Vietnam, in which Ngu Hanh Son Mountain is known as « the famous destination in Vietnam ». Da Nang has a long coast with many beautiful beaches such as Non Nuoc, My Khe, Thanh Kh, Nam O with many sparkling nature. Around Son Tra peninsula, there have coral area which is suitable for develop all kinds of services. Mineral in Da nang includes: white sand, granite, pebbles, clay, mineral water.

Han River and Bridge of Han River-the first bridge in Vietnam-the pride of Vietnamese, are two symbols of Da Nang. Bridge of Han River represents the new life, aspiration of the Da Nang. The beauty of the bridge seems perfect in the space of Han River. This bridge not enhances for transportations, promote the potential economy but also is a cultural mark of the Da Nang. Beaches are the source of inspiration that Da Nang has. They are not only clean but also the most attractiveness beach in Vietnam. The city along Han River- the beautiful city is an ideal destination for tourists in their vacation.

Coming to Da Nang, you will have opportunities to enjoy the beautiful scenery such as Ngu Hanh Son, Ba Na, Son Tra peninsula, Hai Van pass, beaches and many historical relics. In addition, Da Nang is the best choice for tourists, they can enjoy the wonderful time on the top of mountain, in the forest or the coast, they also enjoy quality services when relax in the resort of Da Nang. Furthermore, tourists can join into festivals of Da Nang such as: Cau Ngu festival, Quan The Am festival, Hoa My village festival, An Hai communal house, Muc dong festival and Tuy Loan village festival.