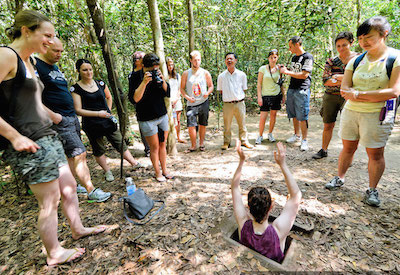 Cu Chi Tunnel is 70 km from Ho Chi Minh City in the Northwest. It is miniature battle versatile of Cu Chi’s military and people during the 30-year struggle longtime and fierce to fight invading enemy to receive independence, freedom for motherland. It also is the special architecture lying deeply underground with many stratums, nooks and crannies as complex as a cobweb, having spares for living, meeting and fighting with total lengths over 200 km.